Friday’s hostage-taking attack on the Radisson Blu Hotel in the capital of Mali, Bamako, is both similar and yet quite different from the terrorist activities of ISIS in Iraq and Syria. Equally important to remember is that the immediate challenges posed to the West and its allies is of a totally different magnitude from those posed by ISIS in Iraq and Syria. First of all, Mali is one of the countries that encompass the Saharan Desert. Second, it is one of the poorest countries on the face of the earth with an average daily income of about $1.25. It is also one of the hottest and dryest countries with recurring droughts. It is home to the ancient city of Islamic learning and the legendary crossroad of camel trade routes–Timbuktu. Though Mali is one of the largest countries in Africa in terms of area, it is also one of the most sparsely populated ones. Mali’s population, in the area north of the Sahara, are largely Tuareg (Berbers), and African Black in the region to the south of that gigantic and inhospitable desert. The capital city, Bamako is in the south. As speakers of their own Berber or Amazhigi language dialects, the Tuareg Berbers are technically not Arabs. Indeed, the French colonialists in the 19th and 20th century Algeria and Morocco exploited the distinction between Berber and Arab, driving a wedge between the mountain Berbers and the Arab populations in the plains. Nor are Berbers, even the Tuareg Berbers a unified whole, as sect fighting over water and control of trade routes has been common throughout their history.

Tuareg Berbers, as you can see from the graphic below, have are mostly concentrated in four Saharan countries, Libya, Algeria (which has the largest overall Berber population), Niger, and Mali. Tuareg Berbers are most concentrated in Niger and Mali. An estimated half-million Tuareg Berbers live in Mali, mostly in the north Sahara. Berbers, historically, have been a nomadic warrior population, one that is highly stratified, with nobels on the top level, and slaves or vassals rounding out the population. The Berbers were converted to Islam following Mohammed’s death, during the second caliphate, known as the Umayyad caliphate (roughly 644-656 A.D.). They actually were recruited by the Arabs for the conquest of Spain. In contemporary times, the Arab dictator Muammar Gadaffi, hired Tuareg Berber warriors to help him maintain control in Libya.

Though Islamic, the Tuareg’s brand of Islam is a mix of traditional, often animistic, beliefs and Koran. Mainstream Tuareg Islam is considerably looser, with many cultural differences. For example Tuareg women play a very different role in society than women living under Islamic fundamentalism. Indeed, it is the men, in Tuareg culture that wear the veil; women’s faces are generally uncovered. Ever since Mali’s independence in 1960, there have been a series of Tuareg uprisings in support of their own state in the north. Iyad Ag Ghaly, one of the chief Tuareg leaders during their rebellion attempts in the 90’s, wanted a more traditional form of Islam, one governed by Sharia law, and broke away from the Taureg, forming the Ansar Dine in 2012. A relative of his, Hamada Ag Hama, leads yet another militant Islamic group that calls itself Al-Queda in the Islamic Maghreb. AQIM is largely independent of the Al-Queda groups in Afghanistan and Pakistan, and is thought to be a loose connection at best. In 2011, with the fall of Gadaffi in Libya, Tuareg warriors there returned to Mali and helped launch the uprising in 2012 to form an independent state which they called Azawad. This led to a two military coups in Mali, fighting over territorial gains between the Tuareg and their Islamic rebel allies., and in the ensuing civil war, in early 2013, the French intervened. This then is the background for the hostage taking at the Raddison in Bamako. It is not even known which of the groups was responsible. The Islamic militant group AQIM as well as an offshoot Al Murabitoun, have claimed credit and an Algerian Islamist as well is under suspicion. Whether in response to the Taureg rebellions for an independent Azawad, or competition among the less numerous Islamic militant groups, hardly a month goes by without some form of conflict. The creation of modern Mali’s borders that don’t conform to serious ethnic divisions is laid largely at the feet of France and, as they showed in 2013, they are  capable of dealing with serious instability there themselves. 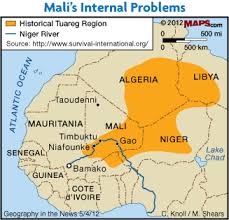 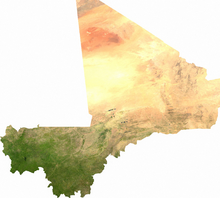